The Turkish equestrian world passed through many phases both before and after the foundation of the Turkish Republic in 1923. Races had been organized primarily in Izmir, then in Istanbul, Ankara, Samsun, Urfa and Bursa. First foreigners, then private individuals, and later still the Horse Owners' Association were responsible for the administration of the races, whose contributions to horce-racing and horse-breeding in Turkey we must duly acknowledge. Still, a relative chaos reigned in the organization of the races during the first years of the republic.

People who generated ideas about the development of horse races - Sait Akson and Özdemir Atman among them - gained the opportunity to implement their ideas in 1950. With the approval of the president and prime minister, the Jockey Club was founded in November 1950 by Mr. Fevzi Lütfi Karaosmanoglu of Izmir, a minister whose family had been riding horses for generations, representative and retired general Mr. Saim Önhon, former horseman Mr. Halim Sait Gürkan, Mr. Nijat Evliyazade of Izmir and Mr. Sait Akson . The first Board of Directors was comprised of the founding members. On April 14, 1951, the first locale was opened on Ziya Gökalp street in Ankara in a ceremony honored by the presence of president Celal Bayar. New members were signed on the same year and the number of members in the Board of Directors was increased from 5 to 7.

The Club was sanctioned by the Cabinet as a non-profit organization and was given the name Turkish Jockey Club. In July 1953, ordinance number 6132 took effect, giving the Club authority to organize races for 20 years, under the supervision of the Ministry of Agriculture. The Turkish Jockey Club organized its first race in September 1953 and rapidly launched several projects to improve breeding, training and infrastructure.

Since its inception, members of the board have strengthened the Club and played the most important role in making horse racing a profitable industry and an income redistribution tool for the country. To sum up the most important accomplishments of the Club: The second contract for another 20 years was signed on 19.th November 2000. Today races are being organised at 9 racecourses all around Turkey, in Istanbul, Izmir, Bursa, Ankara, Adana, Sanliurfa, Elazig, Diyarbakir and Kocaeli. The Jockey Club of Turkey also contributes to Turkish thoroughbred breeding market with its covering stations in İzmit, İzmir - Torbalı, Adana – Seyhan, İstanbul – Silivri and Şanlıurfa. Today TJK owns 5 well-known stallions, which are Banknote (GB), Cuvee (USA), Lion Heart (USA), Powerscourt (GB), Victory Gallop (USA) etc... The Ankara race track is finished. Modern stables have been built in every race track. Photo-finish devices have been purchased. Starting box machines have been purchased. Closed-circuit TV broadcasts have been enabled. Automotic ticket dispensers have been distributed and a web of authorized dealers has been created all over the country. Agreements with TV networks and private channels made live broadcasts a reality. On October 12, 1986, a decision mandated that the headquarters of the Club be moved to Istanbul. The number of permanent members, which was 24 in 1950, has today reached 120. 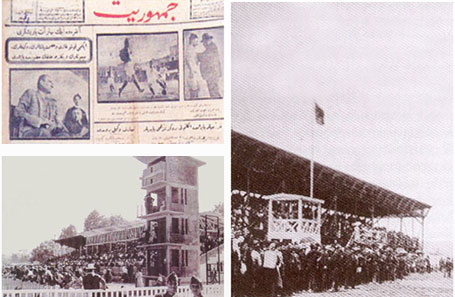